How can Electric Mobility contribute to solving the fuel crisis? 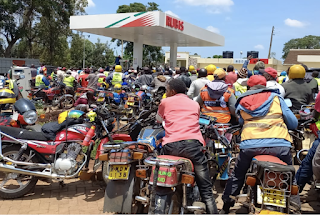 In most parts of Kenya, the past few months have been characterized by gruesome images of crowded petrol stations, snake like queues of vehicles with empty, thirsty tanks waiting for that elusive diesel/petrol quench, riders, jerricans in hand, in line for hours on end and losing out on revenues where their time could have been better spent. The increasing cost of fuel doesn’t help either, the impact felt, not only by those whose income is highly dependent on the transport sector but even those whose daily commute to work requires some form of vehicle with an internal combustion engine. Households are directly affected as the transport budget has doubled or tripled for some. The cost of public transport has increased significantly just as much as the fuel budget for private commuters who have to make sacrifices to ensure their families get to where they need to be.

The fuel crisis extended far beyond the pump, with lack of affordable transport affected businesses and prices of commodities keep rising thus impacting the bottom line for most households. These events have triggered the conversation on alternative sources of fuel for mobility that are not highly dependent on fluctuating fuel prices, global political and economic climate and the imminent transition to renewable sources of energy.

Electric mobility could be argued as a viable solution for the Kenyan commuter. Approximately 92% of the energy generated in Kenya is renewable which provides a suitable foundation for the transition to sustainable mobility. The government is currently developing policies that will provide a favorable climate to attract investments in sustainable mobility. These investments if channeled towards developing public charging infrastructure and research and development of electric vehicles and bikes that are suitable for our roads.

Several companies are currently providing electric mobility solutions in Kenya. You can find more on these companies here.

While the cost of fuel can be described as unpredictable in recent times, the cost of energy required to fully charge an electric car or bike is quite predictable. A rider using diesel powered bike requires about 500KShs. For 100km of use daily. The cost of energy currently can be estimated as 23KShs. per unit. For most  electric bikes currently  in the Kenyan market  two units of power can sufficiently charge a battery for use over a range of 75km. There are other costs of operations that could then bring the total to 200KShs per day reducing the total cost for a rider by 300KShs. Electric vehicles also have fewer mechanical parts which reduces the cost of maintenance significantly. This is just but one way in which electric mobility can reduce the cost of fuel for commuters. There is a concern that with power outages, electric transport can come to a standstill. This can be addressed by utilising a combination of energy sources at charging stations. Having hybrid systems such as grid connected and solar powered stations can ensure commuters have reliable access to battery charging and swapping points.

The solution to the current fuel crisis is to develop policies quickly that can create a suitable environment for the adoption of electric mobility.